Based on the real sport, Biketrial Experience allows you to perform awesome moves like Bunny Hops, Gaps and even Hooks to overcome obstacles and finish the track as fast as you can.

State of the Game

You can play with keyboard or gamepad (recommended). Tested with Xbox360, XboxOne and PS4.

You have 7 tutorial levels + 14 levels to play.

Art is minimalistic for now so I can focus on gameplay tweaks. The following images should illustrate the target graphics for the final game. 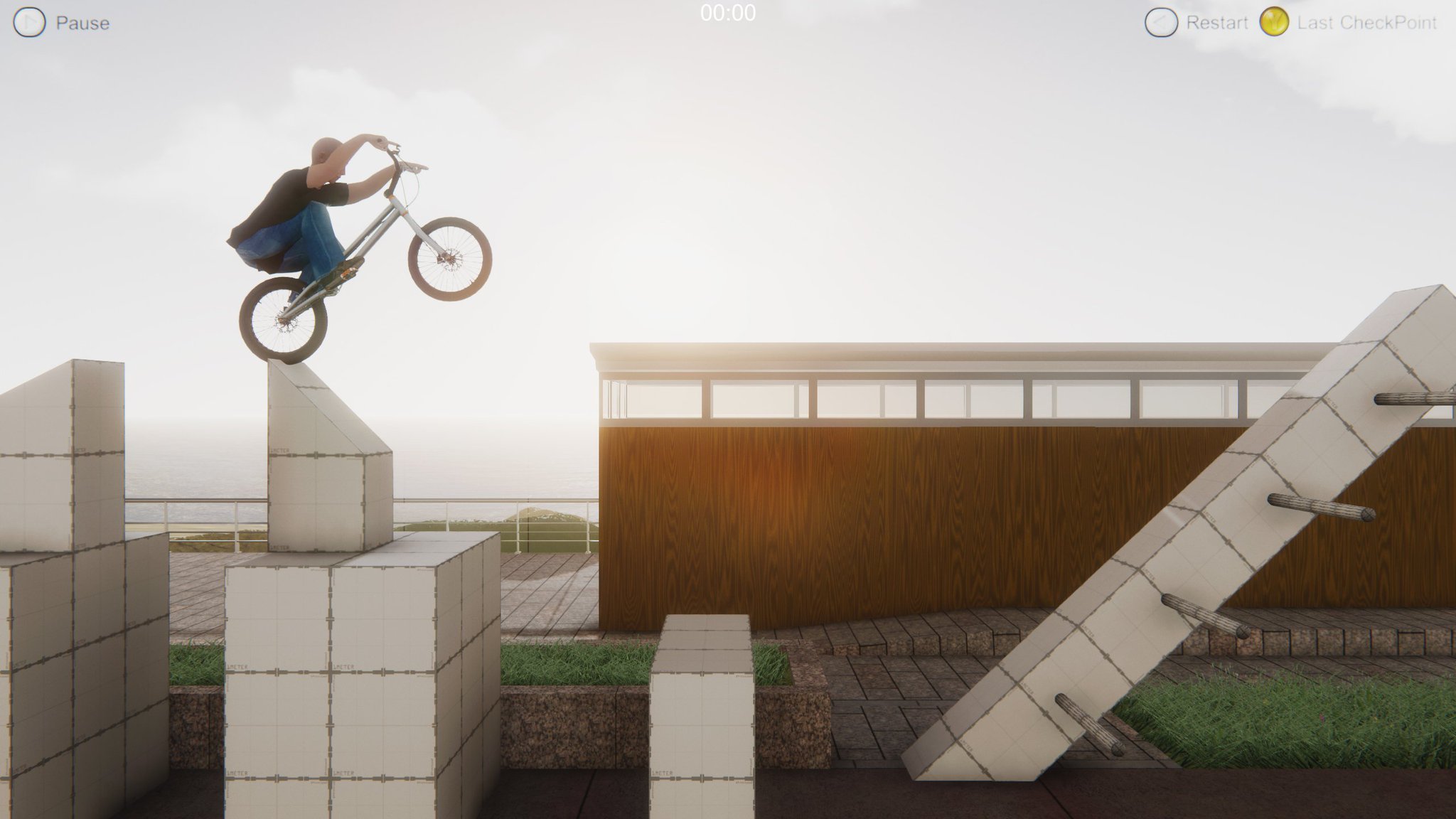 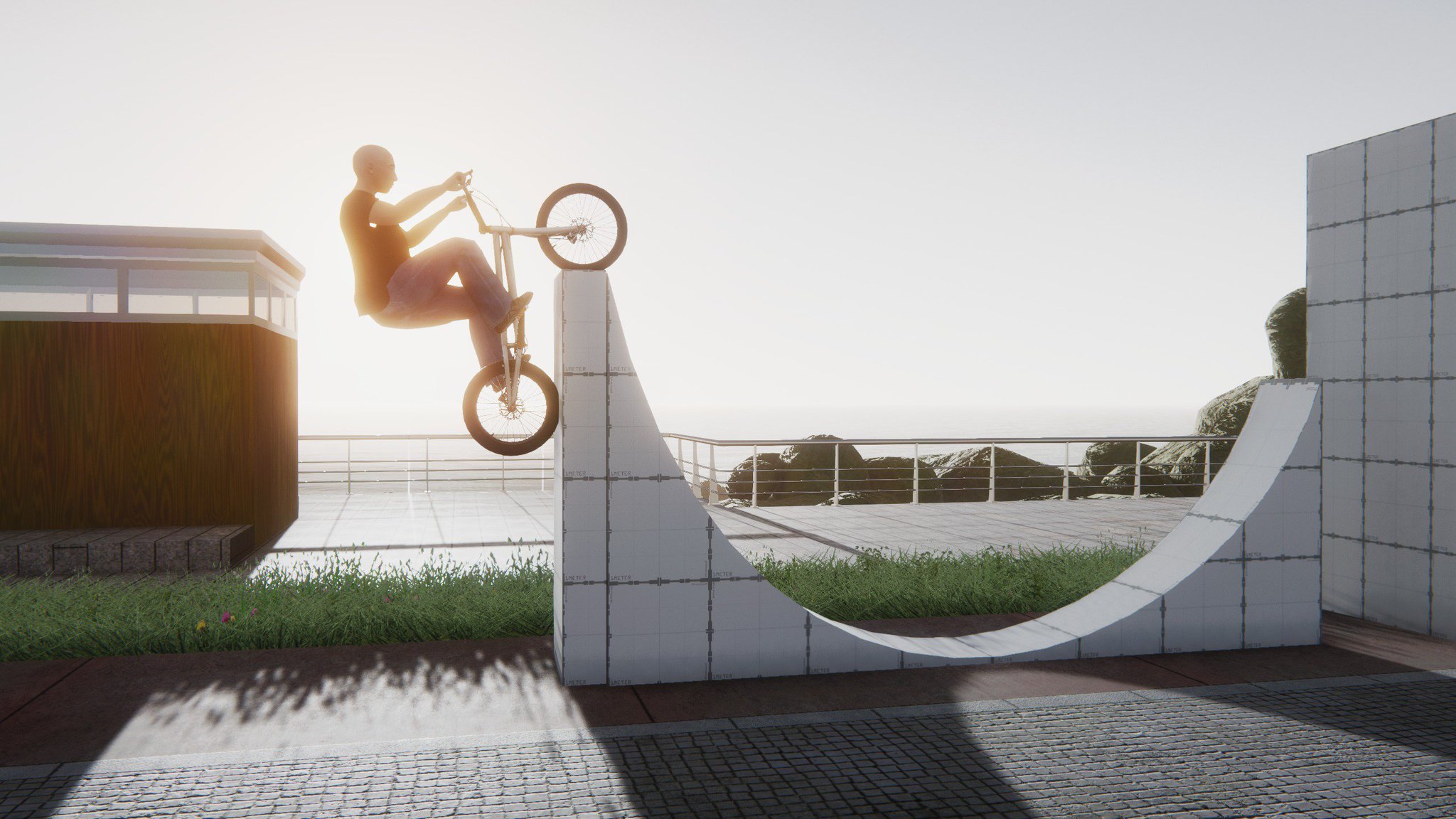 The game has minimal Audio.

The game is hard (and it should be) but i want it to be fair too. I need your input on that so I can tweak the gameplay while maintaining the essence of Biketrials.

The game is playable on the browser but if you are having performance issues you can download the desktop version (Windows only).

If you can record your play session and send it to me it would be awesome :D

Hook1 is sooo difficult, landing on the little dots >_< been at it for days

I had EXACTLY THIS game concept in mind and was next in my "games I have no time to develop" list. thanks to you I realize how insanely complex the physics are and can now move on to think about something less difficult to deliver, thanks! :))

Reply
Shane the Freestyler121 days ago

Looking like a pretty cool Trials-like so far, with physics that takes more into account how pedaling and hopping works vs the BMX bike in Trials which basically behaves like a less powerful MX bike.

also in the full version will it cost money?

it works on iPados if you have controller

But it crashes randomly

Does it have coyote time? I didn't see/feel any but that could just be the cooldowns.

Hello developer!!! I'm the one that sent you the survey the day that this comment is posted.  Please, continue to update this game. I suggest to add a BS 180 and a FS 180 for the people that not only want to beat the level but to beat it looking smooth. A great way to add to that is to add tricks that would help the players looking for a fluid run create that good feel of the constant success as well as the clean looking trick. I think this would be a great aspect of the game .  This game is very fun. Please, Keep up the fantastic work.  IF YOU WERE TO MAYBE ADD THE 180 READ THIS SUGGESTION ON HOW THE 180 COULD WORK - make it to where if they do a 180 the W key makes them go the same way as it would if they were not rolling away backward. Also, for the buttons, you could make the controller controls the left shoulder is bs or fs 180 and the right shoulder the other one that you chose for the left shoulder. If the shoulders are taken by another action then make it the triggers its just the controller controls are confusing I cant tell on the picture weather its pointing at the trigger for brake and accelerate or the shoulder buttons so I don't know which top pair is taken. for keyboard players you could make it 1 and 2 to do the fs or bs 180 and for both controls however long you press the 180 action without letting go the faster it will spin but they all land perfectly its either a straight  landed 180 or 360 it wont land facing the screen or crooked. if you tap either buttons it will be a slow 180 but you will land. if you tap the 180 action two times you will do a fs or bs 360 but it will always be the same speed. If they start spinning slow then they will go fast the closer they are to the ground and if they start spinning fast the closer they are to the ground they will go slow so that way you dont end up doing a 90 or so you dont end up coming to a sudden stop in the middle of the air once you did the 180/360 because that would just look dumb... That was just a way improve to the flow of the 180 or 360. man, I feel like I just wrote a book. but this was a 30m comment (how long it took) I guess that just shows how much I love this game!!! :D please tell me anything you dont understand about what I commented respond and tell me what you dont understand because I wrote this on a time schedule so I kinda rushed the comment so i didn't have time to edit!

no it will be the same just more fps

when i play on browser it always says page unresponsive

hey. it's a bit strange, it should work. Just tested and it's working here. Have you tried another browser?

yes many other browsers

how do i pause on cp?

ngl i like the fact that the game doesn't have colors, in the future, if there will be a color update, it would be really cool if there was a setting to change it back to black and grey

I second this. I love the black and white.

The only immediate tweak I would right now is to have the checkpoints be a different color (the black poles look like obstacles at the moment).

I understand that you may be tempted to add realistic textures, but imho you are passing on a golden opportunity to really stand out visually by not being just another game going for realistic textures. Keep it black and white and invest in some black and white visual effects to make the visuals standout a bit. (maybe some kind of shadowing/negative effects, and maybe some grey/white particle effects like a subtle dust puff when landing the tires on the ground. Even go a bit cartoony with some rough straight edges or something.)

Just keep in mind: you already did the hardest thing: translate the trial experience into "realistic" but learnable and intuitive controls. that is no mean feat. The bike/rider balance is also spot on. I do believe that if you put a solid scoring/evaluation/challenge  system on top of this you have the potential to become to the Trials Series what Skate is was to the Tony Hawk Series.

It's incredible to me that after 1 minute of learning the bunny hop move (on keyboard of all things) I had already created a flow of key presses that made the bunny hop just seam effortless. Although you are using way too many keys compared to what I would normally tolerate in a game, here you have just nailed the execution so well.

This game really deserves a polished release. I insist, don't focus on adding realistic graphics, players often don't know what they want until you show it to them.

thanks for the kind words guys. after so much time passed one thing i keep thinking about changing (if i'm able to come back to it) is indeed make the game simpler. Cut a bit on the difficulty so more people could get interested not only in the game but also in the sport. It feels like a huge barrier. Let's see what the future holds

Thank you so much for the love. I certainly wasn't expecting people to play it so much time after the release (damn almost 2 years). Let's hope one day i can gather the means to take this to the next level. Biketrials really deserves it. Cheers ;)

That's one of the things that i would do after this release. I wasn't able to work on it at the time and it doesn't seem better right now. Let's see if one day i can make that work.

i need to see the keybord keys

Hi. You can go to Option-Controls-Keyboard and check/modify the keys

I adore this game so much.

Put a survey in for ya, hope it helps.

Took my time and put a lot of thought into it.

Please give us an update on the game! I would love to have more of it and play in colours!

When we can play the biketrial experience in colour?

Is the best game in the world

It's good,but still disappointed since it doesn't support ALL controllers,like a Generic Dual Shock controller.

Love the game! I had to force myself to stop.

At the beginning the tutorial is incredibly hand holdy for such a difficult game. For the more complex tricks I can see why it's there, but I don't think text is a good way to teach the tricks. The videos in the background work well though.

Imho you should get rid of the talking and move all of the tutorial into the background, or at least make the tutorial skipable. With the current difficulty of the levels it is clear that the game does not target the casual gamer but someone who has played games before and likes a bit of a challenge. I think it's safe to assume a certain degree of competence.

I agree with you, the tutorial is a bit boring. I was just trying to figure out what would work best and, as you said, a lot less talking and more video is a better idea.
You're right, this is not your casual Trials game, here you really need to learn a few things to get the most out of the game but i think it's worth it in the end specially if you are into bike/sports games.

I really like  this game, its really fun to play but I have one problem. I'm trying to play with an xbox 360 controller and everything seems to work well except when I press the A button it respawns like the Y button instead of hopping and the B button does a mixture of hopping and pedalkicking which doesn't work very well... great game though :)

Thanks for the feedback. hmmmm that's strange. I've develop the game with the xbox 360 controler in mind (i own one myself). That happens both on the browser and .exe? What's your OS?

Yeah, I just tried both and had the same problem and I'm on Windows 10. I'm not sure if it would make any difference but my controller isnt an official xbox controller, I've never had any problems with it before though :/ I cant connect my official ones to check though

I'm glad you liked it. Don't forget to tell your friends :)

I will. I think you took the best of the trial games and you make it more... like...deep (?), I mean in some trial games they don't let you do that amount of tricks (the pedalkick, the hops and the gaps), but you see lot of people in real life do it.

Im waiting for another update in your game and I must say again: Good job, keep developing the game I think this game will have future

You really understood the essence of the game. Unfortunatly this puts the game in a niche market but I'm ok with that as long as there are people like you enjoying it.
I'm still open for criticism though so if you have anything you would like to add/tweak gameplay wise I'm open for that.

Sorry but i won't be able to do it. I tried but i'm getting really low performance (between 20 and 30fps). 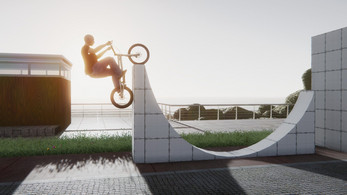 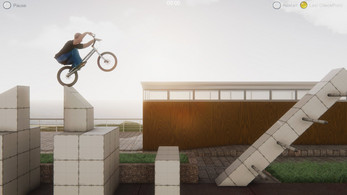